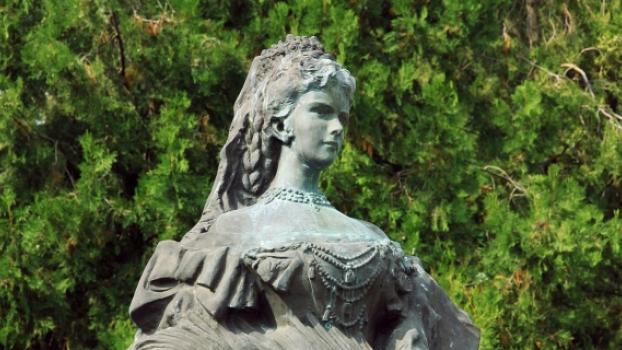 Always completely over the top and thatʼs what we love about her. Sisi is an icon for many supporters of the gay community. At least the self-staging and the aesthetic principles of her royal campness serves some clichés and actually there are also a few links between Sisi and homosexuality.

Sisi had at least two people in her close environment, whose homosexuality is undisputed. But her realationships to Ludwig Viktor on the one hand and Ludwig II of Bavaria on the other hand couldn’t be more different than they were. Ludwig Viktor, called Luziwuzi by family members, was definitely one of a kind. He was the youngest brother of Emperor Franz Joseph and the lifelong baby of the family, had often been riduculed but by the way enjoyed kind of a jester’s license. Later he turned out to be not so amusing, but a guarantor of major scandals: It’s said that he has worn women’s clothes and let somebody take photographs of this show – to the horror of his family.
In Centralbad (today: gay sauna Kaiserbründl), a well-known but somewhat shady public bath and sauna for officers, he was involved in a fight. The legend says that Luziwuzi had fondled an officer who was not so enthusiastic about that and slapped the poor groper. In addition Ludwig Viktor allegedly invited officers to join him swimming in his in-house pool – but did never provide any swimwear for them. Elizabeth looked at her brother in law with suspicion, not because of his sexual orientation, which she never brought up, but because after her opinion he made mischief within the family. When the family was no longer able to cover the sexual activities and the scandals of Ludwig Viktor, he was moved to Klessheim in Salzburg (where he felt very well).

The relationship between Elizabeth and Ludwig of Bavaria, who was gay as well, was quite different. Ludwig of Bavaria is the one who became King Ludwig II later and he was the beloved cousin of Empress Elizabeth. She described him as her soulmate. The two of them had a lively correspondence and even exchanged their poems. But (don’t belive everything you read in books) this relationship was purely platonic, promise. Ludwig’s II private diary, which was published in 1925, reveals that he prefered the male sex. It also displays that he was trying to repress and conceal his homosexual desires, which he perceived as sinful himself. The idea of hiding all life long was a very heavy burden, and furthermore not successful at all: The king regularly invited servicemen to his castle to celebrate with him. Celebrate … if you know what we mean. It’s improbably that Empress Elizabeth didn’t know anything about his rather open secret – but she never remarked something about it. More important than his sexual affairs was the deep friendship of the two king’s children Ludwig and Elizabeth. Perhaps it was founded on the fact that both were struggeling and trying to hold their own in a life that seemed to be a (more or less) gilded cage. Both contended against their depression and the oppression of their families. While Ludwig II died under likewise tragic and unexplained circumstances – his dead body was found in Lake Starnberg on June 13, 1886 – Sisi went on the run. First her escape lead her into an excessive beauty- and fitnessprogramm that is surpassing to date.

Probably this is not our favourite way to start a new day. To be honest: we are sure that it’s not. The Empress followed a strict daily ritual that should preserve her beauty: At first she had to take two slices of raw meet off her face, which she wore overnight to thighten her skin. The she sipped a glass of fresh milk – a luxury good back then. Thereafter she did gymnastics on the bar, with rings and some training with dumbbells. For this purpose the Empress had an exercise room in each of her homes, the fitness chamber at the Hofburg can still be visited. And what you will see if you go there is nothing but the first gym in Austria. Private, small, but still. After the workout it became less funny, as the weighing and measuring started. The ideal body measurement? 110 pounds for a height of 5,64 feet – the less weight the better. No surprise that Elizabeth was also on a diet she took so serious that she suffered from famine edemas (which indeed is bizarre) and people back then were talking about eating disorders, in a time when this term was not even invented. Today the anorexia of Empress Elizabeth is seen in connection with her depressions.
But not only the body had to be perfect, so did clothes and finery: The Empress has been a fashion icon of her time. Her hair went down until her ankle and the imperial hairstylist Fanny Feifalk spent three hours a day combing and braiding this superb head of hair. In the event of washing her hair Sisi was rather reserved. This happened only every third week (like it was usual that time) but took one whole day.

Travel should take you to places …

or bring you far away from them. Away from Emperor Franz Joseph, from the mother-in-law, from the strict ceremonial on the court (which was a never-ending horror for Elizabeth), and from the whole curious puplic (who followed every single move the Empress made). Sisi was unresting, her character was marked by a desire of freedom, melancholy and drama. She celebrated her marriage with Emperor Franz Joseph in the year 1854 – way to young and harum-scarum. And this marriage feels even more constricting than any of the corsets she wears. Sisi wrote down in her diary: ’Marriage is an absurd arrangement. You are sold at the age of 15, making a vow you don’t understand, but which you regret the following 30 years or longer, without any possibility to undo it.’ Indeed there is no possibility to undo the vow for the Empress, but there is the possibility to escape. In the year 1860 the rumours about the Emperors infidelity increase and lead to a marriage crisis. But probably Elizabeth was not totally innocent: She should have arranged a meeting of her husband and actress Katharina Schratt – probably with the idea of activating an affair between those two. An affair of her husband would give her more time and freedom for herself. And Sisi succeeded. Franz Joseph was enthusiastic about his „Kathi‟ and Elizabeth was gone with the wind. First stop was her parents’ house in Possenhofen, then she headed to Madeira. To stop nasty rumours, the imperal family spread the story, that Elizabeth suffered from a lung disease which required marine air. The „prescribed cure‟ took two whole years. Thereafter Elizabeth acquired trains, carriages and ships to travel the world anytime she liked. She explored Istanbul, Asia Minor, North Africa, France, Venice and Greece, especially Corfu.

The Empress finally found a new home on the island Corfu. Around 1890 she initializes the construction of her own palace on the island. She calls it Achilleion, as a reference to the gay hero of the Ilias. In the myth Achilles shares tender feelings with Patroklus, in real life he was a personal hero of the Empress. 1884 she arranges the sculpture „Dying Achill‟ from the artist Ernst Herter; inside the house you find a fresco showing Achill again. But this time he is alive and shown as victor in front of the town gate of Troja. Nowadays there is a second sculpture of Achill in the garden („Victorious Achill‟ from Johannes Götz). This sculpure was put there after the death of Elizabeth. While Sisi used the palace, there was a monument of Heinrich Heine in the parc. The famous poet was another hero of the Empress: She adored him, he was her poetic ideal, her master. More than that Sisi believed that Heinrich Heine dictated the poems which she finally wrote down. The statue of Heine got replaced by a statue of the Empress herself after her death. 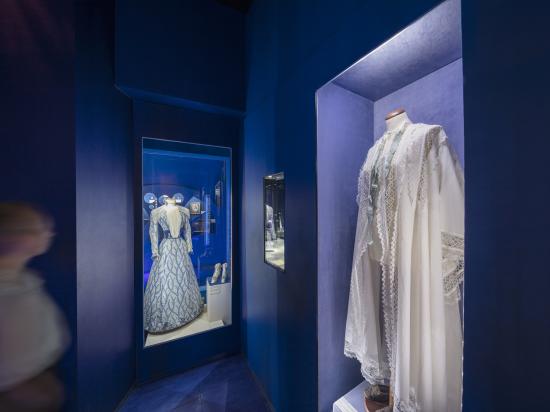