Marrakech is probably one of the best known tourist destinations in the Arabian world. In contrast to countries like Egypt or the United Arab Emirates, Morocco is just a short flight away from most European cities. The city became popular with hippies and celebrities, like Yves Saint Laurent, in the seventies. The authorities pretended to overlook what the foreigners where doing, mostly when it came to recreational drugs and alcohol. Also, homosexuality among foreigners was tolerated.

But the times have changed and as moral attitudes became less liberal and substance abuse became real problem and today, trafficking, sales, possession and use of drugs entails harsh penalties. Morocco may seem like a paradise for stoners, but it really is not. But if you like zouks, or bazaars, with colorful clothes and furniture, the smell of exotic spices and exotic food, Marrakech is perfect for you. The city has no access to the ocean, but you can stay in one of the big resorts outside the city walls. They have huge swimming pools and wellness areas where you will be treated like a sultana. If this is your thing, you should go there in spring and summer, because Marrakech is located at the foothills of the Atlas mountains, 466 m above sea level. Therefore it can get to chilly for swimming in late autumn and winter.

We recommend to stay in one of the small "riads" in the city center anyway. Most of them are family owned with a beautiful courtyards and several floors high. On the top of the riad, you can enjoy the view over famous Jemaa el-Fnaa, a huge square and market place with food stalls, magicians and snake tamers. You can marvel at the beautifully illuminated  minaret of the Kutubiyya Mosque and if you manage to get up early, watch the sunrise as the sun bathes the Atlas mountains in golden light.

In the 60ies and 70ies, Marrakech has become very famous for being a mecca for hippies, partying and even easy male-to-male relationships. But this has been a different time and since then, a lot of things have changed.
LGBTIAQ+
Travel+ 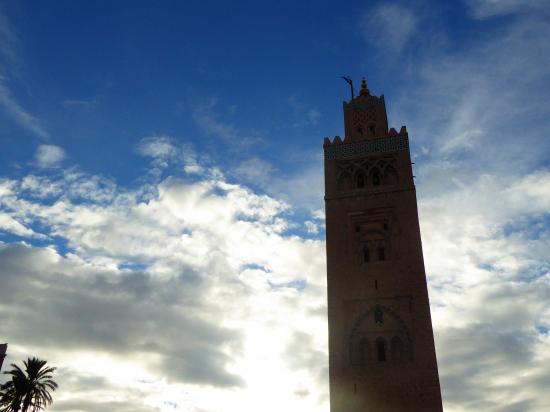