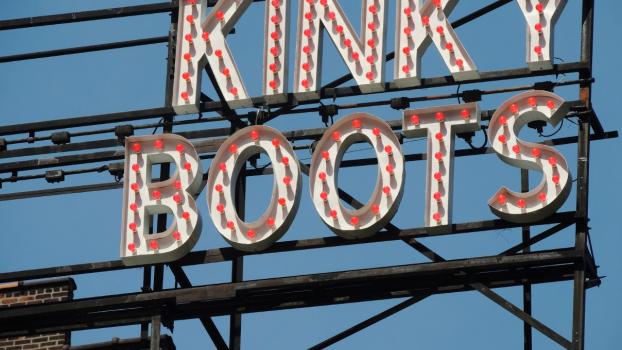 Culture
Music
United Kingdom
London
London
London, Westend
Did you reach your teens in mid 2000s? Then you almost know for sure the English hit movie "Kinky Boots".

Did you reach your gay teens in mid 2000s? Then you almost know for sure English hit movie "Kinky Boots". It’s the old „English working class „conservatism“ vs. London hipness“ British comedies like to play out against each other.

Well the movie wasn’t a huge success, with a tomato meter critics rating of 57 % on Rotten Tomatoes, but the audience score awards the Britcom with a rating of 74 %. Producers, writers and director Julian Jarrold were playing safe and trying to jump on the Britcom train and ride along on the success of other British comedies, notably „The Full Monty“.

And the movie would have been a sure bet for a nice video weekend if not 80ies icon Cindy Lauper and uber-gay Harvey Fierstein came along and took the story of the movie and adapted it to come out as a smash musical hit in the early 2010s. And it is no jukebox musical, it is important to add.

In my humble opinion, jukebox musicals are creeping out of too many (dark) corners, these days. Has every story been told? What are the creatives doing all day long?

Of course, ABBA’s Mamma Mia! Was great, but do you remember the storyline or is it just that ABBA is just a great band? But me ranting about jukebox musicals would be worth another article, so I will spare you that.

Back to Kinky Boots! I’ve wanted to see the musical for quite some time, since i first so that the show was running in Toronto. I have watched the movie after i just came out of my closet, on a Sunday afternoon mainstream German TV channel. I think it was RTL 2, little brother of RTL. And I liked the movie. It was a nice afternoon distraction, nothing more, nothing less.

It took several attempts, but finally i managed to see the show in December 2018, shortly before its final curtain at the Adelphi in London’s West End.

In my opinion, it’s one of the musicals where you keep grinning permanently until the end of the show. It’s no Shakespeare play with music., or coming back to my Austrian roots, no hidden (regime) critique from Nestroy or Grillparzer to get it through Imperial censorship. It’s got no deeper meaning, besides the quite obvious message, that we are all equal and should treat each other with respect.

In the German-speaking area, Kinky Boots was not that successful as it was in the Anglosphere. Who knows why. Maybe the British working class theme didn’t resonate with the German audience. In Hamburg - Germany’s musical capital, it just ran for 343 shows from December 2017 until September 2018. At the Tonys in 2013, Kinky boots won the most nominations (12 out of 13 categories and took home 6 awards, including „best musical“. It’s British equivalent, the Laurence Olivier Awards 2016 where less favorable, but still Kinky Boots won 6 nominations and actually got 3 awards, including „best new musical“ and „best actor“.

Did I buy the soundtrack? Yes, I did, when I was back home and have reflected my Westend experience and you wouldn’t believe it, but I found my hits and added them to my playlist.